Since Hummingbot lets quant traders run bots on many different exchanges, community voting on exchanges has always been important to Hummingbot. In 2020, we ran a governance experiment that let users vote for the next exchange to be added to Hummingbot, using Discord emoji polling.

The experiment was a huge success, attracting thousands of votes from the Loopring, OKX and Beaxy communities to get their exchanges into the codebase. It generated a ton of spirited debate/discussion, and the competition between exchanges resulted in many new users joining the Hummingbot community. However, there were also issues with Discord bot voting and vote-buying that may have influenced the polling. For this reason, we announced that we would merge in all 3 exchanges that participated.

To implement governance in a more thoughtful way, we issued the HBOT governance token at the end of 2021. Now that voting can be done with HBOT tokens, we believe that it might make sense to re-introduce regular monthly votes to “feature” exchanges.

The overall idea is that each month, the Foundation creates a poll that lets HBOT holders vote for an exchange to be featured during the next month. Any exchange that has a working connector in the codebase is eligible, and the exchange who get the most votes wins.

The main benefit of being Featured is that the Foundation would run a community-wide trading competition for the exchange (see below).

Each month, the Foundation would run a trading competition that rewards Hummingbot users with HBOT tokens for supplying trading volume to the Featured exchange. Participants would need to enter their ETH address as instanceid in the Hummingbot client, as well and have heartbeat turned on.

This allows the Foundation to measure a Hummingbot client’s monthly traded volume per exchange. The level of HBOT rewards earned would depend on the volume supplied, as well as how much HBOT held in the participant’s ETH wallet. 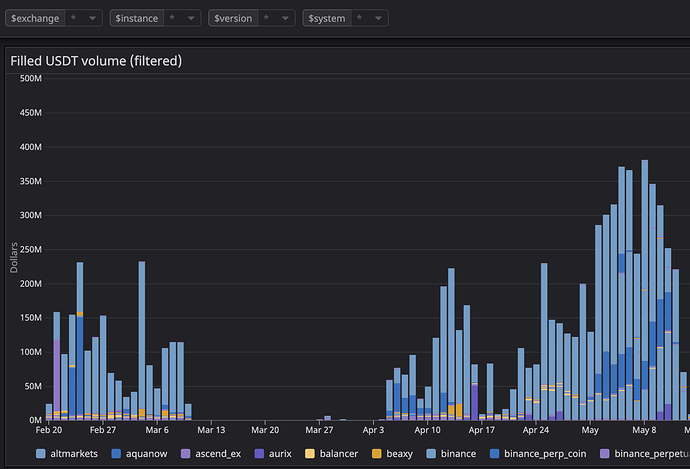 For instance, above are the monthly volumes by exchange for the past two months (note that a bug, which has ben fixed, resulted in a 1-month data hole in March/April).

We believe that this competition would mobilize the Hummingbot community to drive volume to a single exchange for a period of time. Hopefully, this would showcase the collective power of the distributed global Hummingbot community to impact an exchange’s volume, driving demand to become Featured by exchanges and their respective communities.

What do you think?

Like the Exchange Certification idea, we are circulating this idea to get feedback from the community. Please add your thoughts and questions below.

If the community thinks it’s a good idea, the next step would be to submit a governance proposal and, if it’s approved, start implementing the process with the June or July release.

I love it and I would appreciate you sharing a guide on how to have ‘heartbeat’ turned on. I am doing huge volumes on the crypto dot com exchange using Hummingbot and I would love to send you the data of my trades so you can analyze it and improve the product further

I would like to support & actively participate in these monthly trading competitions. These are great opportunities to indirectly market HBOT token & community to exchanges. These will also give us opportunity to explore using & developing other strategies & its parameters.

Cheers for these awesome ideas & for making HBOT’s value stronger in the years to come!

Sounds great! I I wonder, whether exchanges would be also interested to support such competition to draw new traders to their exchange? Perhaps they would like to throw in some extra prize money into the bucket to win a poll for a certain month and become a playground for that round of the competition. Because as always, eagerness to participate and overcome the registration process for new users and so on, grows with the reward, right?